YAGA is a photo book about the idea of emancipation of socially excluded women that the system finds inconvenient. It provides a subjective view of women and inequality existing even in the queer world, where men still get more space for telling their stories than non-heteronormative women who seem to go out of sight.

Baba Yaga is an archetype common to Slavic countries — this being an elderly woman living alone in the woods, surrounded by an animated natural world, the ghosts of her ancestors manifesting as black cats and mean old crows. (…) Baba Yaga, as the embodiment of patriarchal fears, brings to the fore questions of status, resources and norms which must be obeyed. Baba Yaga’s woodland cottage is perched upon chicken legs, symbolising exclusion — being an image of isolation, loneliness, misery and poverty, being also a symbol of opposition and energetic emanation of potential revenge. (excerpt from an essay by Agata Kalinowska)

Yaga constitutes an archetype of a contemporary witch, but YAGA is, above all, an emancipatory idea. Agata Kalinowska’s first publication is a book about freedom – about non-heteronormative standards of attractiveness, age shaming and deconstructing the male-female myths that shape the system. It is also a work about the relationship between beauty and socially imposed female identity. It is about the liberating power of a conscious choice to be excluded, to function outside the confines of norms and the established cultural context – about the isolation that allows one to exist on one’s own terms.

Agata Kalinowska – photographer, writer and bartender affiliated with BWA Wrocław, Ośrodek Postaw Twórczych (Creative Arts Centre), and the Wrocław bar scene. Her interests include the experiences of the precariat, which she documents on her blog relativelyhuman.blogspot.com. Agata’s work has been presented in Poland and abroad. Her exhibition Just Don’t Fall in Love, held at the Miejsce przy Miejscu Gallery in Wrocław in 2015 and curated by Łukasz Rusznica, enjoyed immense popularity. Her dummy SCUM was shortlisted for the Kassel Dummy Award in 2018 and made it to the finals of the Gomma Grant 2019. YAGA, was released by BWA Wrocław in August 2021. 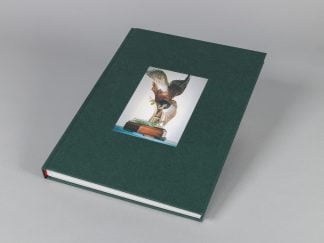